As I wrote previously, I wanted to learn to use Github Pages to build a new blog and start keeping track of my personal projects and ideas. However, in getting started, I noticed that there really wasn’t a straightforward way to move from Github’s quick and dirty tutorial to actually creating a useful blog. There’s some tools like Jekyll Bootstrap, but it seems like it’s been a while since it has been updated. So after combing through a lot of other people’s pages and some Jekyll tutorials, I was finally able to get something presentable up and running. I figured I’d share the overall process I used as a first series of posts, in case someone else finds it useful.

This first post will center around getting a development environment setup and creating a “Hello, World!” type page to demonstrate the basics. So without further ado…

This guide assumes a standard Ubuntu installation and a pre-existing Github account. 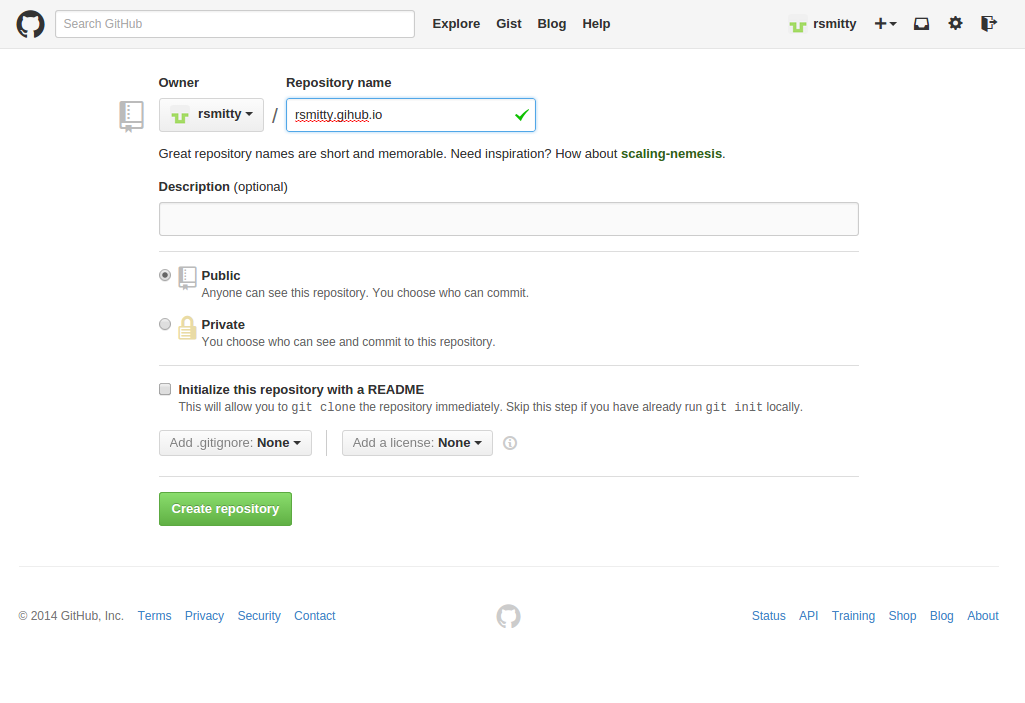 There’s a certain folder structure that Jekyll looks for in your repo. For example, all posts must live in the ‘_posts’ folder and must be titled like YEAR-MONTH-DAY-TITLE.FORMAT. To help understand, the title of this post is 2014-09-06-creating-a-blog-1.md. Anyways, I wanted to get up and running with the absolute basic amount of stuff needed in my repo so here’s what seemed to work.

###Check It Out On Github

Okay, so we’ve got our first official page. How do we get that out to Github? Turns out, it’s really easy, because we’ve already got everything laid out just right locally.

###Closing That’s it for part one of this tutorial. We’ve now got a development environment setup and know how to push our pages to Github. In part two, we’ll explore how to use Bootstrap to setup a blog layout and create some custom layout pages so that our site looks clean and user friendly.

Someone was kind enough to send me an email thanking me for the [previous post](https://rsmitty.github.io/Prometheus-Exporters/) I create...… Continue reading